First Sky Construction Limited, a world class roads and highway construction firm has been praised by the President, H.E Nana Akufo Addo for the continued exceptional standards shown in the delivery of its roads projects. Announcing the resumption of work on the 39.3 kilometre Asikuma- Have road by First Sky Construction Limited during a durbar of chiefs and people of Anfoega in the North Dayi District, the President observed, the contract “has been awarded to an exceptional contractor, First Sky Ltd, who has demonstrated commitment and high standards in his road projects’’. He expressed confidence that “ the people along the project stretch will very soon see the action.” Work has since commenced and is expected to be completed in Twenty-Four (24) months by August 2023. Work on the GHC 235m 39.3kilometre road project will include clearing, earthworks, concrete works, pavement and access road construction. It will be funded by the Government of Ghana and supervised by the Ghana Highway Authority (GHA). The Asikuma Junction – Have Road is part of the approximately 695 kilometre Eastern Corridor Project which lies east of the country. It commences from Tema Roundabout through the regions of Greater Accra, Volta, Northern and ends at Kulungugu in the Upper East Region. In a related development, the President has noted with satisfaction progress of work on the Wli Todzi Junction – Wli Todzi and Fodome Ahor – Gbledi Feeder Road currently under construction during an interaction with the Chiefs and people of Fodome – Gbledi in the Hohoe Municipality of the Volta Region. First Sky Construction received further praises for keeping the highest standards of professionalism and commitment. The 8.3 Kilometre Wli Todzi Junction – Wli Todzi and Fodome Ahor – Gbledi Feeder Road is funded by the Government of Ghana at a cost of GHC 116 million and supervised by the Department of Feeder Roads. Progress of work on the project is 72 per cent complete. Commenting on the progress of the project, Executive Chairman of First Sky Group, Eric Seddy Kutortse, noted work on the construction of the 8.3 Kilometre feeder road by First Sky Limited when completed ‘will be the shortest route to Togo, our neighbouring country while improving economic activity between Wli Todzi and its neighbouring communities in Togo.’ ‘We are mindful of the massive expectations that the Government and the people have about this project and assure all stakeholders that First Sky Limited is firmly focused on delivering our trademark service of quality, excellence and exceptional high standards by deploying all cost saving and value for money mechanisms that we are noted for’ Mr. Kutortse added. The President had recently embarked on a working tour inspecting projects in the Volta Region 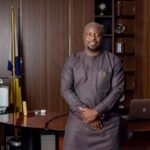